Today, 15th December, I caught the bus from Mendoza to a national park and hiked to Aconcagua base camp and back. It was a really long day but it was fantastic! I decided to catch the 10:15 bus (more details about the practicalities later) and it takes you almost all the way back to the Chilean border (past the futuristic customs building) until you see this sign… 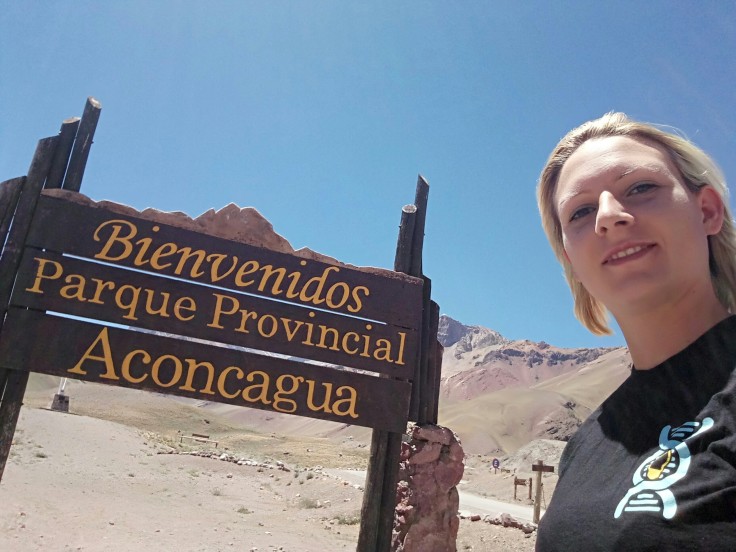 It was super exciting to see Aconcagua up close. The tallest mountain outside of the Himalayas with beautiful glaciers, soaring above the other peaks.

The hike starts at around 2,800m at the visitors centre although there is a car park further up which most people start from. Confluencia is at 3,600m so it’s quite a sudden increase in altitude from Mendoza to Confluencia in one day.

Before I arrived today there was some confusion over the price, with people quoting wildly different amounts. To hike up to Confluencia (base camp) and back in a day you can purchase your entry ticket at the visitors centre. Argentinians pay $200 pesos, foreigners pay $500 pesos (just over £21). If you just want to hike out to the first major viewpoint (with the suspension bridge) then it is cheaper at $40 pesos. For any trips of two days or longer, you should visit the administration office in Mendoza (in Parque San Martin) to arrange a permit, take your passport.

The bus company that gets you to Parque National Aconcagua is Buttini and you can catch the bus quite simply from Mendoza or Uspallata. The price from Mendoza is $129 pesos (£5.50) one way.

The 10:15 bus doesn’t actually get you to the park early enough for them to let you hike all the way to Confluencia, I arrived just after 2:30pm. I was gutted when the woman said that but we had a bit of a negotiation and I said I would be quicker than the guidelines suggested.

My advice would be to take a car, or to get the bus the day before. The last bus leaves Puente de Inca at 8pm and it’s a fair hike from the park entrance back down the hill to the bus stop (especially after a 12 mile hike).

I really love hiking and I have a faster pace than average. I smashed the 5 hour hike in 2 hours, including photo stops. I could really feel the altitude, my legs felt like lead and it was a really hard hike.

The trail isn’t actually very pleasant to walk on as it is an extreme mix of powdery sand and loose rocks, making it very unstable. But it’s still worth it to get close to Aconcagua (which I had to keep telling myself).

There aren’t many people hiking the trail yet, I only saw about 18-20 people heading back to the carpark and about a dozen people heading to Confluencia to camp. At the beginning, the trail heads up a wide open valley with colourful mountains soaring above you. 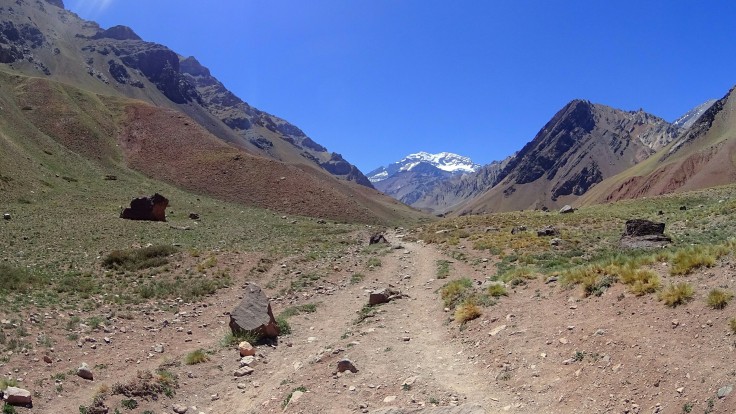 There is a colourful lake which you pass towards the top of the valley. This is near the first viewpoint. 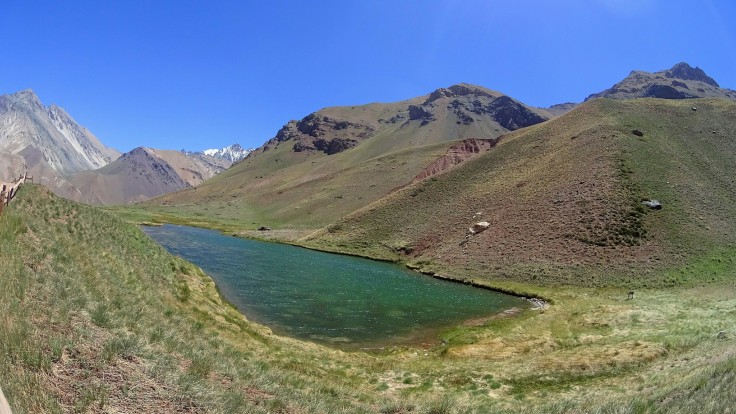 Then you get to a bridge, which is the stopping point for the shorter hikes. The views from here are really nice, so if you’ve not got time to get to Confluencia then this is still worth it. 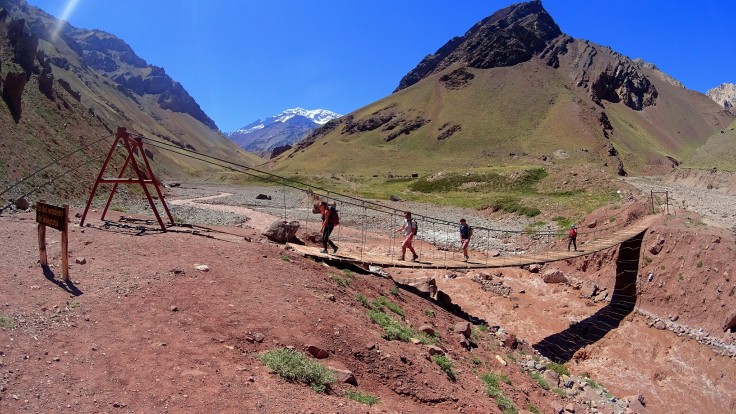 From this point on, the trail is mainly powdery dirt with loose rocks, so watch your ankles and make sure you have decent footwear. There are some sections above the river where the path is narrow and you skirt around these pillars of stone. 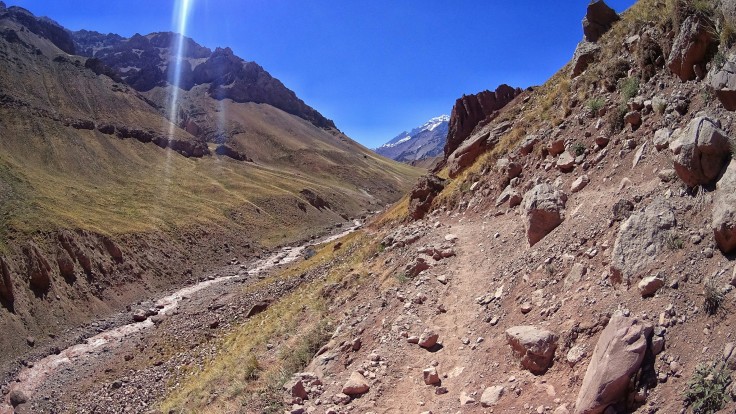 Shortly after this section there is a steep stone gully to cross and then the trail gets steeper.

Then the trail flattens out and you can start to imagine that Confluencia must be close. 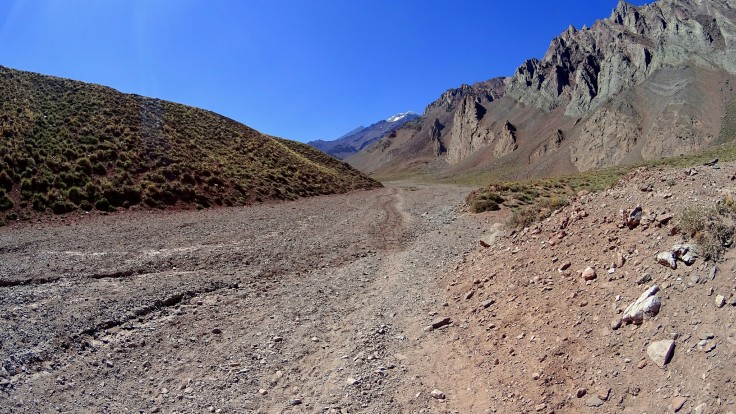 It isn’t far round this corner but it takes a deceptively long time due to a combination of the altitude and the loose dirt. But when you round the bend, you can see the camp in the distance.

And with it, the promise of a closer view of the giant peak.

At Confluencia I was exhausted and struggling to put one foot in front of the other. At the ranger hut I met Joaquin and we chatted for a while as I was getting my legs back enough to walk around. 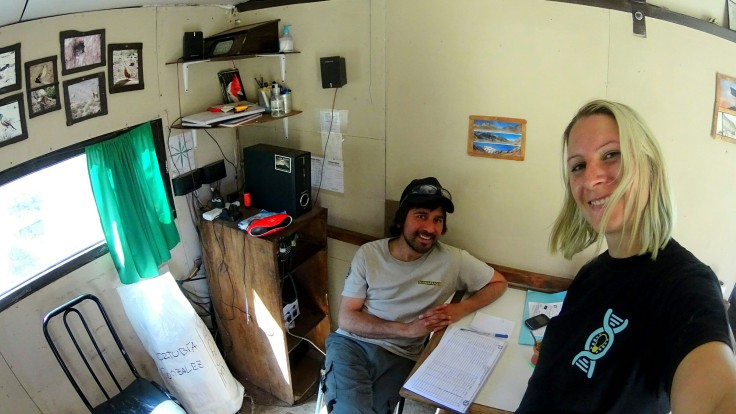 The Basecamp is awash with colourful tents at the moment and was a nice size. The camp is getting ready for peak climbing season at the moment, with most of the population currently being overnighting tourists.

My return journey was a blur of rocks and tracks. I didn’t have long to get out before the park entrance closed for the night, so I had to push my weary legs and my sore feet, but I made it. I then had to walk “2 kilometres” from the park entrance to the bus stop at Puenta de Inca. On closer inspection it’s actually 3.4km.

Just before you reach the settlement, on the right hand side is the Puente de Inca itself, a brightly coloured natural rock arch. Stunning!

I decided to get off the bus at a town called Uspallata and I found a lovely hostel called Samadi Hostel (it’s listed on booking.com). It’s a lovely place and the dorm is nice. The owner, Juan, is really friendly and the hostel is pretty quiet. Sweltering heat overnight here but I found a comfy chair with a nice breeze to unwind before bed.