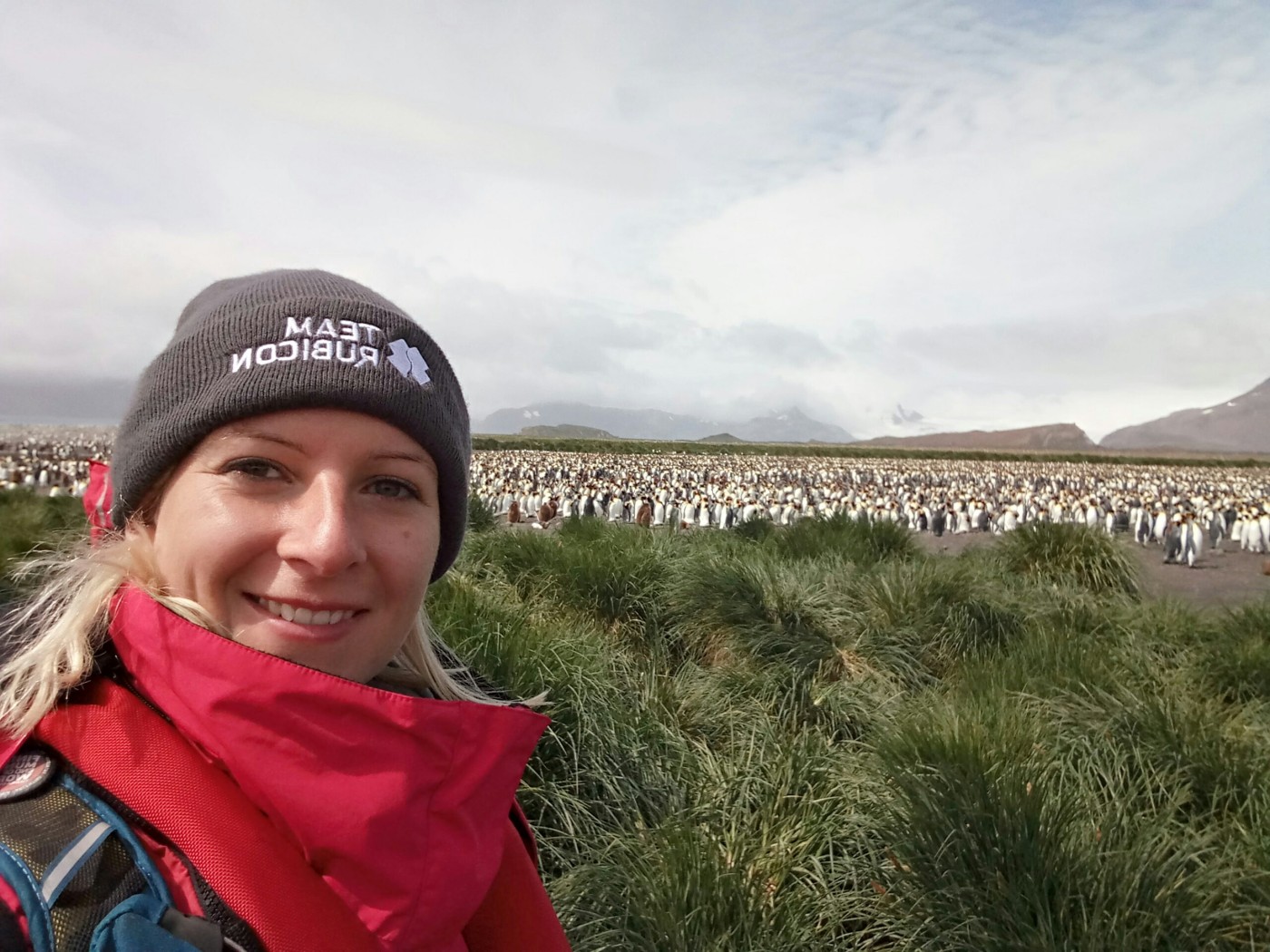 I am writing this after 10 days at sea and during force 3 hurricane winds (what else can you do on a day like this?!). This post is pretty much in reverse chronological order as I write about the Falklands last when we actually visited first.

Aboard the MS Expedition I have visited the Falkland Islands and have spent four days around South Georgia, which truly is one of the most incredible places I have ever been. As I write I am curled up in a window bay in the dining room, one of the best views over the bow of the ship. I am watching for beautiful Macaroni Penguins jumping through the surface of the sea, which is being whipped up by the winds and looks as though it is boiling. We have just sailed past Cooper Island off the coast of South Georgia. The past 10 days has been an almost indescribable experience! A highlight has been spending days walking round King Penguin colonies – my favourite animal! 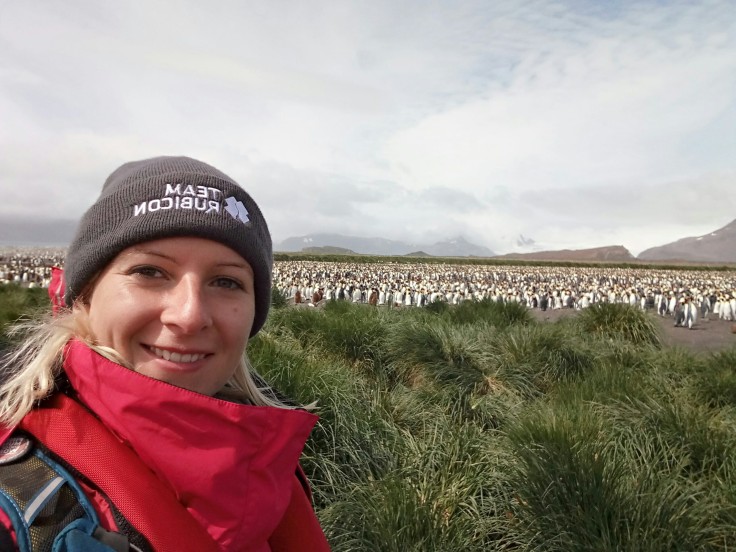 I have seen almost every seabird species that this part of the world has to offer. I spent some time whale watching from the bridge and spotted a Peale’s Dolphin further from land than they are commonly seen.

The staff aboard the MS Expedition are excellent and we’ve had some great lectures about the geography, natural history, wildlife and historical expeditions of the regions we have passed through.

We are following in the footsteps of Sir Ernest Shackleton who attempted some pioneering expeditions in the region aboard the Endurance and on South Georgia I was lucky enough to be able to follow one of the routes he pioneered across the island in desperate search of help at the whaling station at Stromness. 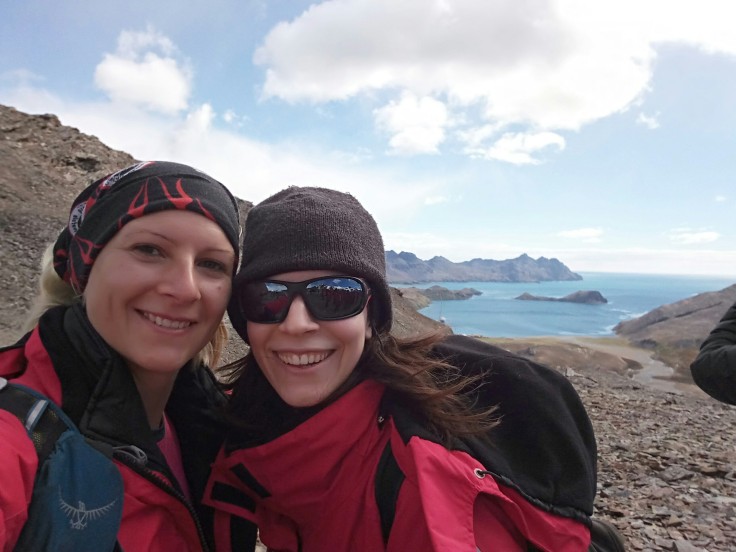 Our expedition is led by Jonathan Green, a Brit who now lives on the Galapagos working to research and protect Whale Sharks when he’s not aboard the Expedition. Every morning we get a wonderful wake up call from Jonathan giving us the date, time, weather, forecast, location and an overview of the day. It’s a fantastic way to wake up and I fully intend to record it one morning! 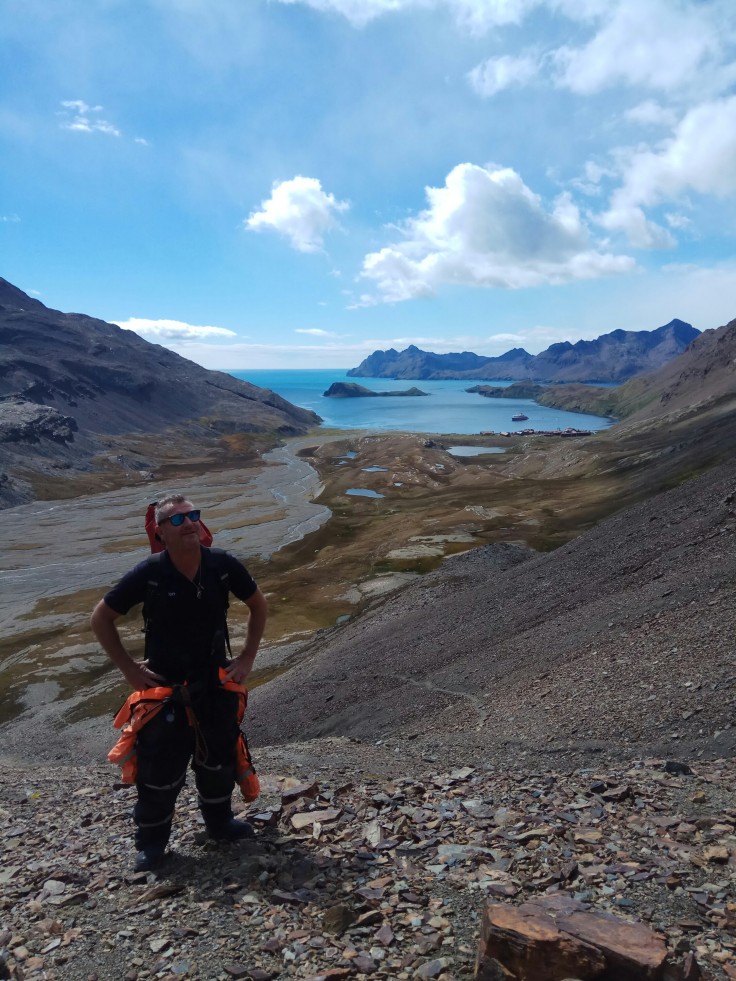 Almost immediately after boarding in Ushuaia we were able to go up onto the 7th deck to get a 360 view of the Beagle Channel as we set sail for the Falklands and at this point I met Julia, a young German neuroscientist who was to become my ship-sister. Later that night we were both adopted by Tony and Barb from Adelaide, who became known widely as our Boat mum and Boat dad. We’ve had loads of good laughs and often eat dinner together at my favourite table with a view over the bow. 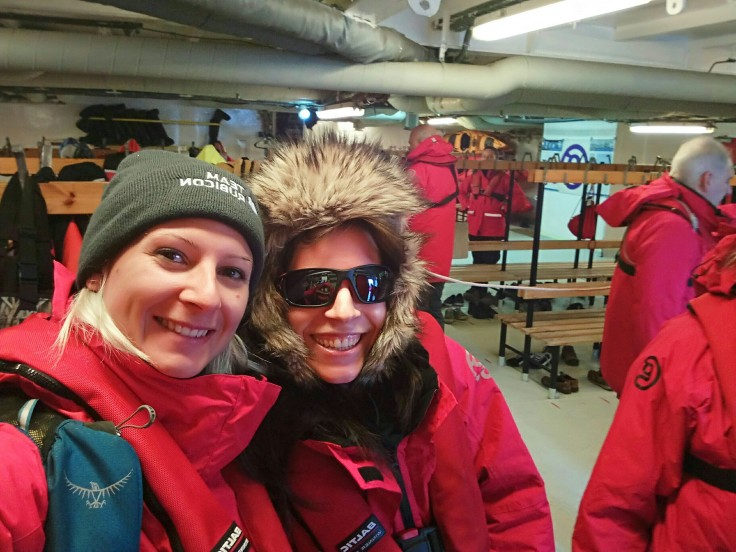 The food is fantastic quality and our waiter Jiji is super polite and helpful and the bartender, Randale, is such a character!! Most of the hospitality department staff are from the Philippines and they are all lovely.

I’ve made some other really good friends, too many to name but I wanted to share a picture of Judi who was using any spare time to improve her sketching ability. On our days at sea you could see Judi carefully studying a picture to sketch or speaking to Gerard, one of the highly talented staff who sketches amongst many other skills, to get his feedback.

In the evenings there was often a documentary or film played in the lounge followed by a concert by either the Philippine staff band, The Monkey-eating Eagles, or by Blaise, the on-board musician. Those evenings were the best and often involved drinking and dancing while being moved around the dancefloor by the rolling of the ship!

At the church at Grytviken on South Georgia, Blaise was able to play a short concert and it was fantastic to sit there in the best seat in the house (I found the stairs and headed straight up to get a view over the whole church).

Yesterday from Gold Harbour I spotted a big iceberg on the horizon, the biggest we have seen yet and this morning, before the full force of the storm hit, the surface of the sea was covered with brash ice, like a slush puppy! One of the best experiences on South Georgia was when we sailed out of a storm into the shelter of the Drygalsky Fjord, a spectacular steep-sided channel surrounded by glaciers which has rarely been visited. 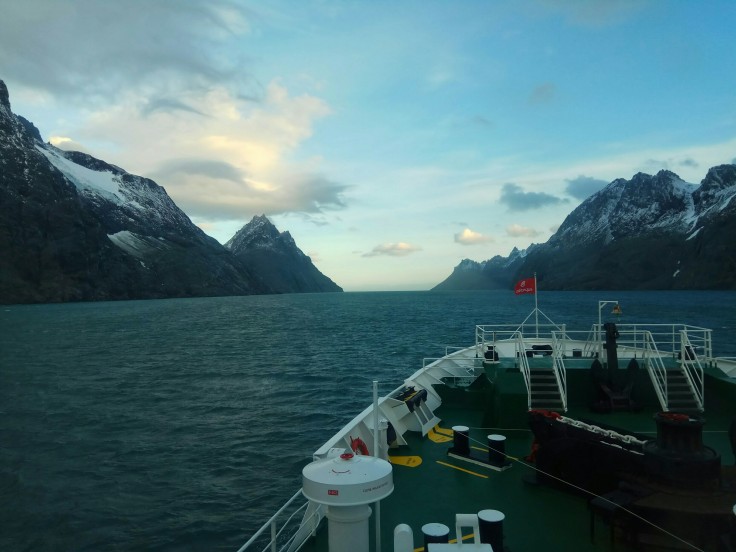 Due to the retreating glaciers we were able to go further into the Fjord than ever before and the water was actually uncharted- appearing as land on our maps! We anchored overnight in this shelter and had a barbecue out on deck! What an experience. This was the last place we visited on South Georgia before we crossed the Weddell Sea to Antarctica.

We would try to make two landings a day using the zodiacs to get ashore. Alongside King Penguins we have also seen lots of Gentoo and Rockhopper penguins. In the water alongside this ship as we passed Cooper Island I saw some Macaroni Penguins, with cute little bright yellow tufts of feather on their heads. 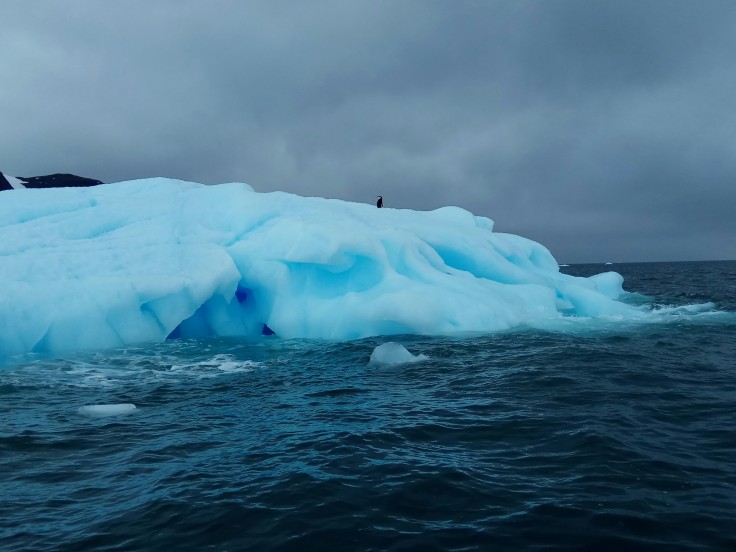 We also spotted a lone Chinstrap Penguin two days ago at Salisbury Plain when we were having an explore in a zodiac. So far we have seen thousands of fur seals including many tiny pups. Some were cuter and more playful than others! We’ve had some lovely little posers interspersed with some older ones practicing for their future roles as beachmasters, deciding who is allowed where on the beach and trying to round us up. I got pretty badly chased by an adult female at the boardwalk at Fortuna Bay but as I was running away (a bit of screaming but mainly arms flailing) down the hill I suddenly remembered the advice Jonathan gave and I turned to face her, stood tall and clapped my hands at her (to be quite honest I shouted “Don’t you DARE!!!” at the same time). It worked and she stopped advancing. She didn’t stop growling but she eventually slunk off the path and out of my way. I was walking up to see the nesting places of the Wandering Albatrosses, the biggest flying bird in the world. And how majestic they are. Worth running the seal gauntlet any day of the week. We saw many more Black-browed Albatross throughout our journey and were able to visit a nesting site on the Falklands where they nest alongside Rockhopper Penguins. Going back to when we left Ushuaia, the Falklands visit was amazing too. We first landed at West Point Island where we saw our first penguins of the expedition. At Saunders Island we saw nesting Black Browed Albatross and Rockhopper colony. When we visited Stanley, on East Falkland, I hiked with a group up to Tumbledown, the site of a battle during the Falklands War. The view from up there was an excellent panorama and we could see the sea on both sides of Stanley as well as the wind farm and other peaks. The flora on the Falklands is unique and so our guide, Brian, was getting very excited showing us all the different plants. The vanilla daisy was my favourite – it really does smell like vanilla!

During our day at Stanley I was lucky enough to make contact with Nina, who lives in Stanley and whom I had never met but had spoken with before I left the UK (as my initial plan was to head to the Falklands first and my friend Eluned in the UK put us in touch so I could get some advice). Nina and her three children, James, Sophie and Thomas, had just returned from a weekend at Volunteer Point and she came to pick me up and take me to see some more of the surrounding area.

We visited the HMS Glamorgan memorial, which is sited roughly where the rocket responsible for the sinking was fired from. Just next to there, on the beach, I swore that I had seen a King Penguin but there were people and dogs all over, so it seemed unlikely. Nonetheless we stopped and I was right! So I got to go and sit with this gorgeous little creature on the beach without anyone walking past to disturb him. He had come ashore to moult so he was pretty sluggish and was calm enough with me sat by him taking photos.

We then carried on round to Gypsy Cove and saw some of the burrowing Magellanic Penguins with their chicks. The water in the cove was stunning, turquoises and greens like a tropical paradise, and it certainly defied expectations. I arrived back at the Expedition on time and we set sail, leaving the Falklands behind to head to South Georgia.

So that was not in chronological order but I wanted to make sure I didn’t miss the Falklands in my excitement to write about South G.