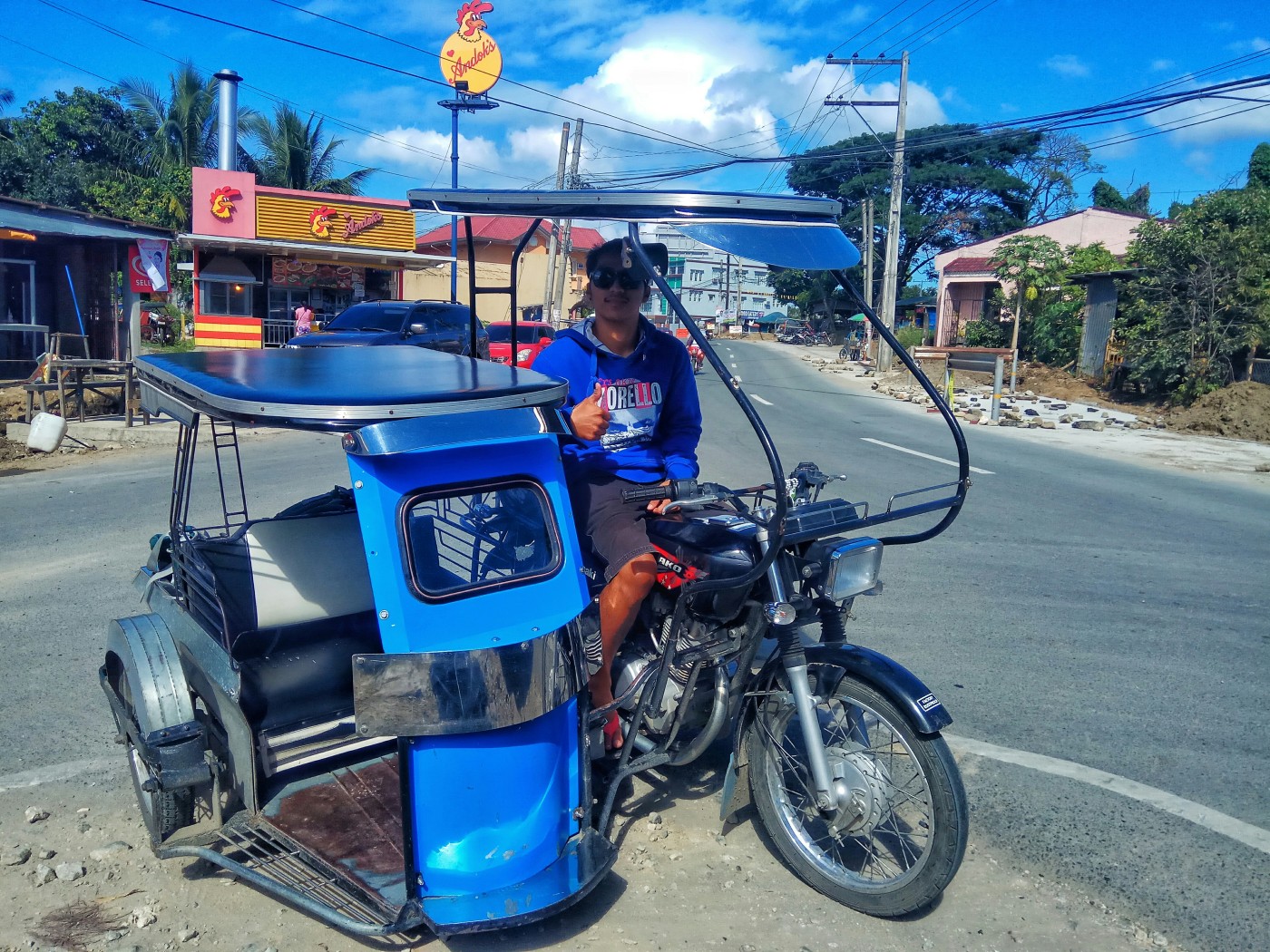 I loved diving at Sabang! Some of my favourite diving in the Philippines; a great mix of abundant life, colourful corals, wrecks and excellent visibility. It was also the cheapest per dive price of my trip.

First though, I had to reach Sabang from Anilao. After my trike ride I got some more cash out from the bank at Mabini Crossing. Dean’s tip was to get out 10,000 Pesos each time as you pay the 250 Peso fee whatever the amount and 10,000 is the cap (though some machines will let you withdraw 15,000). 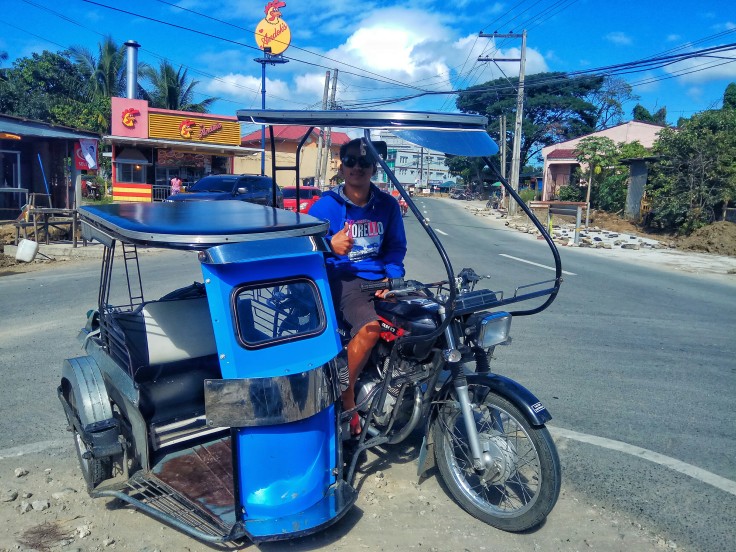 I took a Jeepney from Mabini Crossing back to Batangas City and for the journey I am sitting close to the front so I can see into the cab and out of the front window (to an extent). The Jeepneys think they own the road but it’s also funny to see how the drivers behave with each other. I think they all tune up their engines differently (as well as customising the interiors), so there is a really funny rivalry on the road. It reminds me of Mad Max where every now and again a character sprays chrome on their teeth and shouts a battle cry of “Valhalla” before doing something stupid. 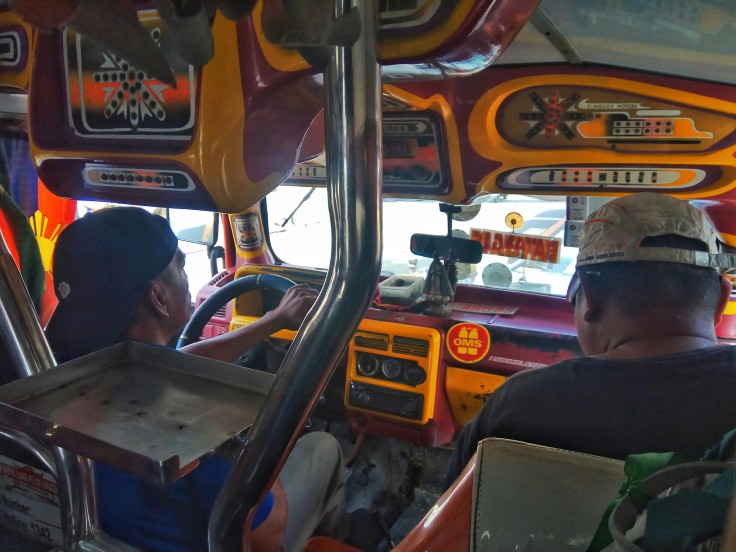 Hopefully today’s journey is much less eventful than my journey here. First I’ve got to reach the port.

I fell asleep in the Jeepney and was woken up and told to get off! I had reached the “diversion” whatever that means because I think it’s a permanent place. Anyway, I got a trike 3km down to the port for 80 Pesos (down from 100) and when we arrived I was repeatedly hassled by people asking where I was going. They didn’t pursue me much though, so I suppose they are used to it. I assumed (correctly) that there are ticket offices inside the terminal.

I paid 300 Pesos (£4.50) for the 12:30 ferry to Puerto Galera Muelle (dock) because I was told that there aren’t any direct ferries to Sabang anymore. Then I waited in the air-conditioned terminal building. There are plenty of places in here to buy food and drink including a Greenwich pizza outlet, which is great.

As we were disembarking, I heard a local guy, called Arthur (whose family owns El Galleon Dive Resort) giving two guys some advice so I asked him to repeat. The price of a trike to Sabang from Puerto Galera should be no more than 150 Pesos. I shared one with Arthur and he paid!

I told the two Swedish guys (Ras and Anton) that I had been recommended Sea Rider Dive Centre so we walked there together and found out that it’s only 1,100 Pesos (£16.40) per dive including equipment rental and that we should come back at 8:45 tomorrow morning. Sorted. It seems like a nice place.

We found a cheap place to stay not far from the dive shop where a woman would let us have an extra mattress so we could share the room between three for 1,700 Pesos (£25) per night with air conditioning, a fan and a balcony. It wasn’t super cheap but it was convenient.

We went for a wander and had beers by the seaside and then tried out the Big Apple bar which seems to be where all the middle aged white men with Filipino girls go. The menu was expensive so we had street food. There’s a great burger place in the alley outside Broadway and across the main road near the Sabang market there is a great BBQ street stall which sells skewers for 10 Pesos each. 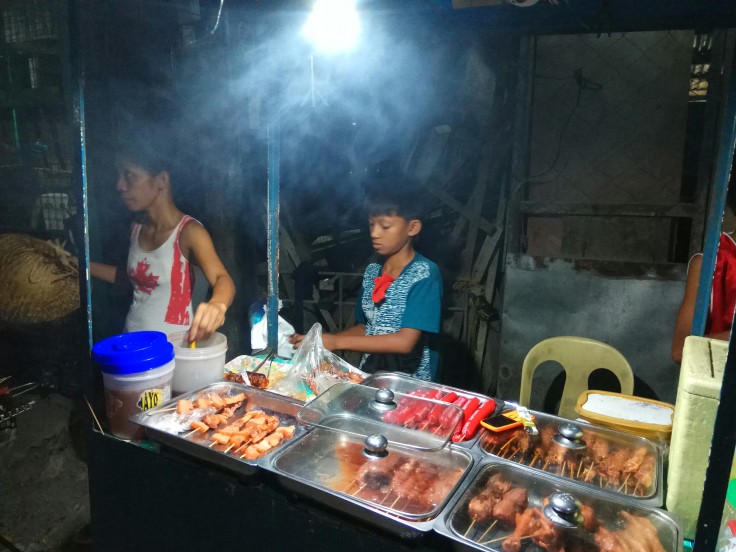 Ras is starting his PADI Open Water course tomorrow so he’s studying hard while Anton and I enjoy the bars, poor thing. But the course only costs 19,000 Pesos (£282) which is good.

We had 45 Peso (£0.70) happy hour rum & cokes at a bar to the right of Sabang as you face the sea. We also watched a competition in the pool hall and got a fairly early night ready for diving tomorrow. 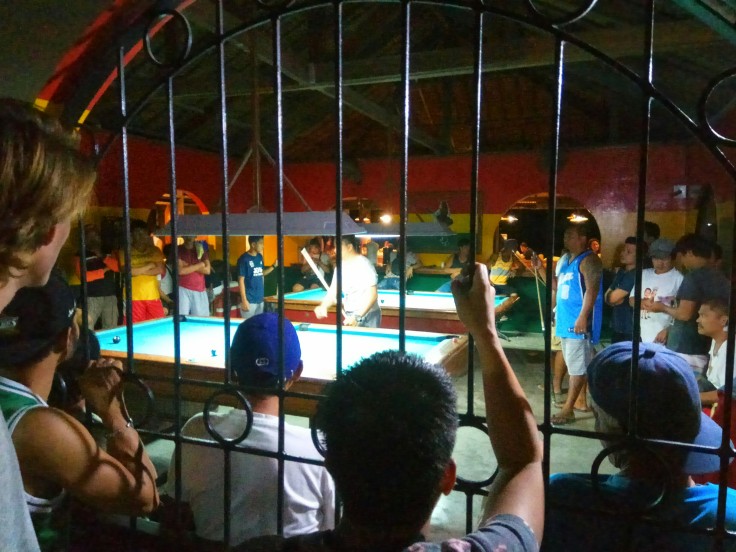 Dive Day One at Sabang

Anton and I had breakfast at White Beard Cafe. The deal is 188 Pesos for a toasted sandwich, a fried egg and a coffee. I upgraded to a lovely vanilla latte for 208 Pesos.

Getting gear sorted was really quick and we left at around 9am for a few minute boat ride to a dive site called Alma-Jane Wreck. There is a 40m long boat resting upright on the seabed in reasonable condition but completely covered and filled with life. 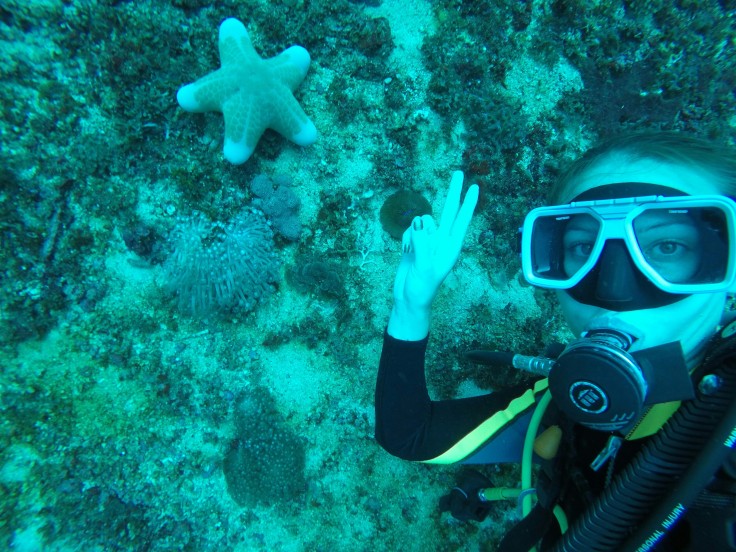 There was a gorgeous school of spadefish as we reached the bottom. 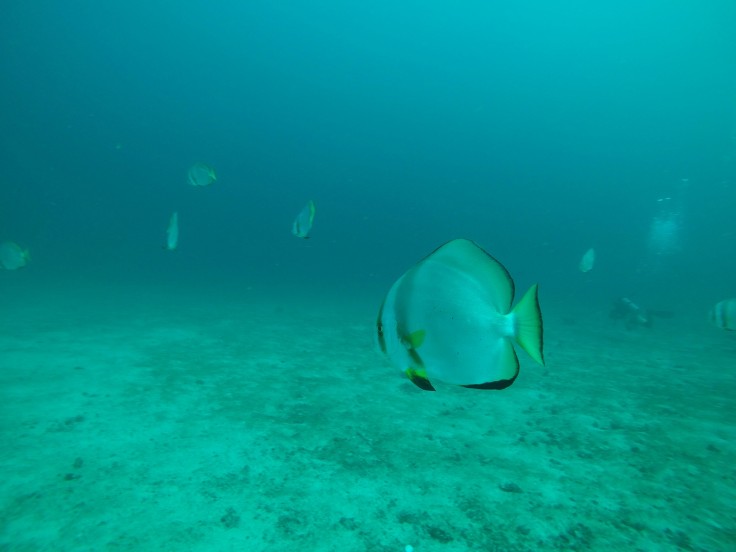 It was a busy dive site so it was tough to keep bubbles out of my face but it was excellent!! We swam around the side of the ship and then over the stern and down through a hole in the deck. Anton spotted a huge nudibranch as we went over the top. 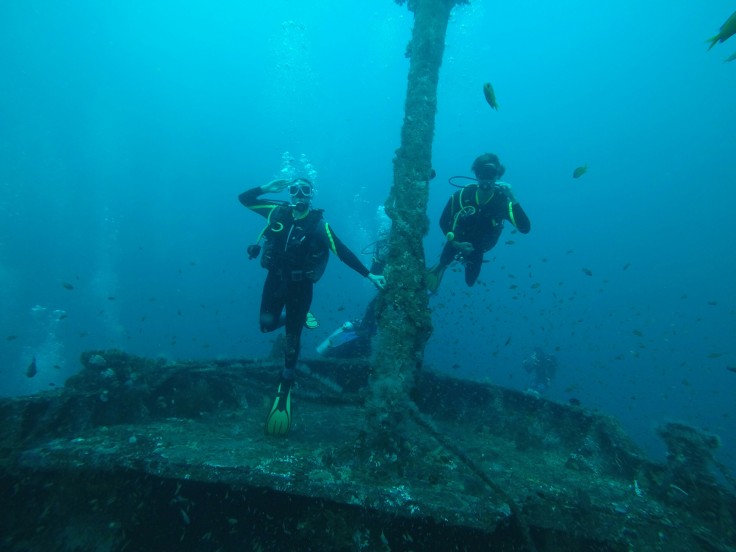 The swim through the wreck was great. There weren’t so many fish when I was going through but it was really cool and there was plenty of light because there are four holes on the deck. 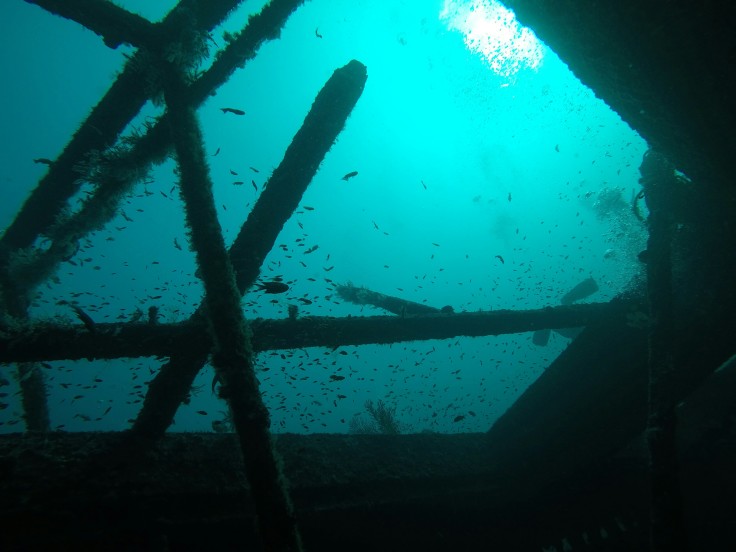 For the rest of the dive we explored a rocky and coral-y area which was excellent. I found a juvenile boxfish hiding in the reef; one of my favourite creatures.

We also saw a juvenile many-spotted sweetlips and they have such an interesting characteristic waggle in the water.

The second dive was at Dungon Wall where we saw a crazy array of stunning corals and fish. I had a cool time watching a mantis shrimp which I found out in the open and then watched as it scuttled along looking for some shelter. 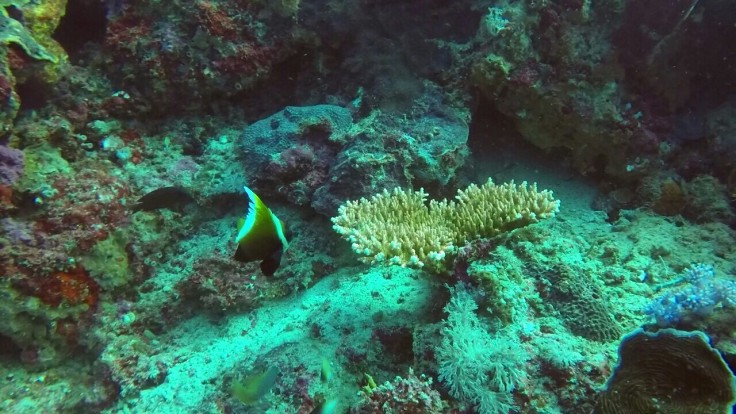 My afternoon dive was at Hole in the Wall, a decent swim through after a drift along a coral garden and then followed by some canyons to explore. I saw some nice Moorish Idols and humphead bannerfish plus two beautiful clown triggerfish (one was full grown and huge!). 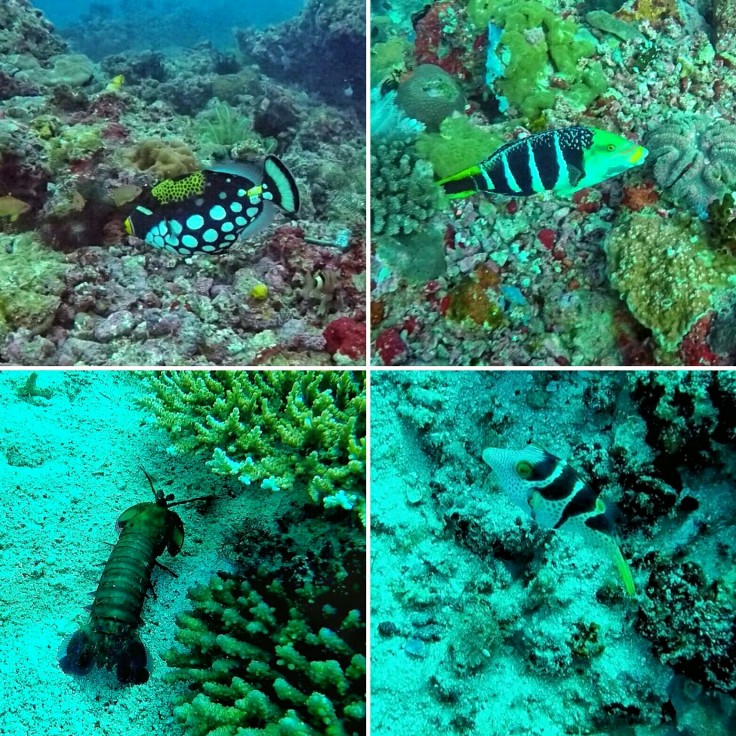 I saw a few cute little Tobys and mimic filefish and I’m getting better at telling the difference because there’s so many here.

Anton and I arrived at 7:30am at Sea Rider Dive Centre and waited for the rest of the divers who showed up at 8. Then we kitted up and carried the gear to the boat.

We took a small boat out to our larger dive boat and then we were on our way. The weather was pretty terrible so the waves we huge! The ride was over 45 minutes because we were battling the wind and the current. We rounded the leeward side of Verde and the water was totally flat then we emerged again to get around to the San Agapito Wall dive site.

This is an excellent drift dive along a beautiful wall and around a corner into a more sheltered flat coral garden, ending in some canyons. The currents here can be strong and there is often a dangerous downward current in one area so it isn’t always such a relaxing dive.

We kitted up and rolled in then headed down to the reef through a mind-blowing number of fish. There were clusters of different species everywhere you looked. Redtooth triggerfish were above us, trumpet fish out in the blue with jacks in a long line below them. 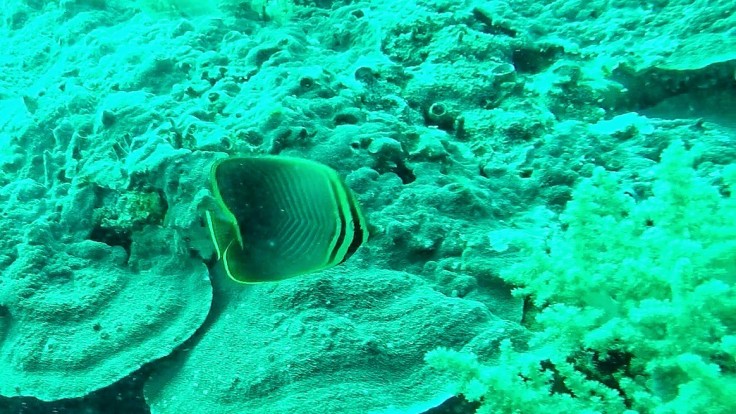 We spent most of the dive completely surrounded by bright orange-red reef fish and small wrasse. The reef was phenomenal, the corals are in excellent condition.

We saw the absolute hugest octopus I can ever imagine seeing; he was tucked right down into the coral but his head was enormous and he changed colour lots as I went over. We saw two hawksbill turtles in a valley. 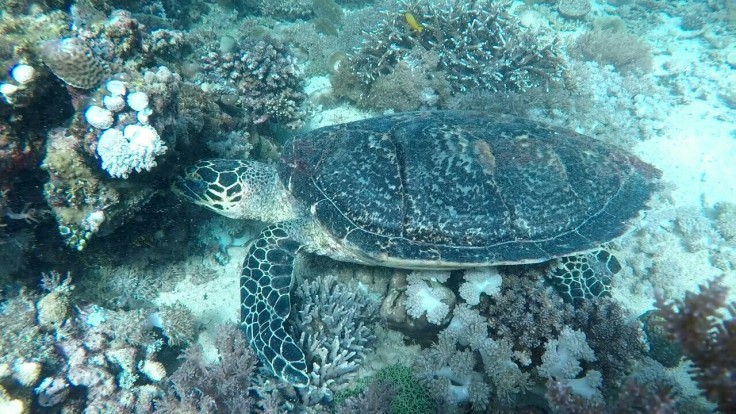 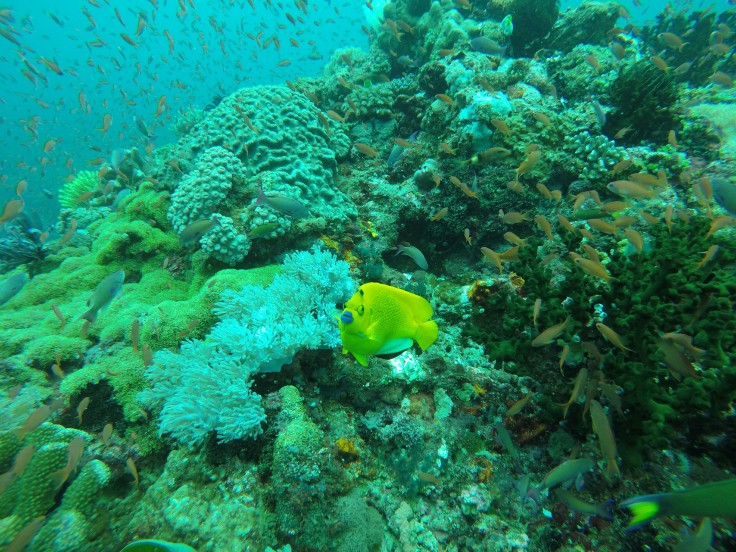 As we neared the end of the dive we were in the middle of a wonderful coral garden and there were huge oriental sweetlips and trevally. A massive blue fin trevally swam past a couple of times during the dive which was amazing. 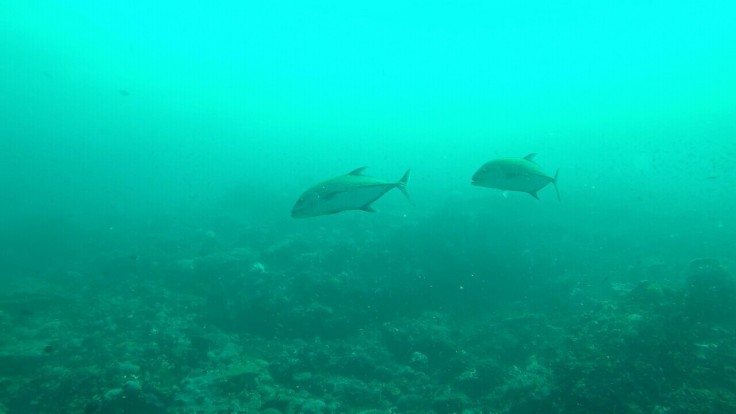 I saw some great butterflyfish and angelfish on the dive too as well as some cute nudibranches. 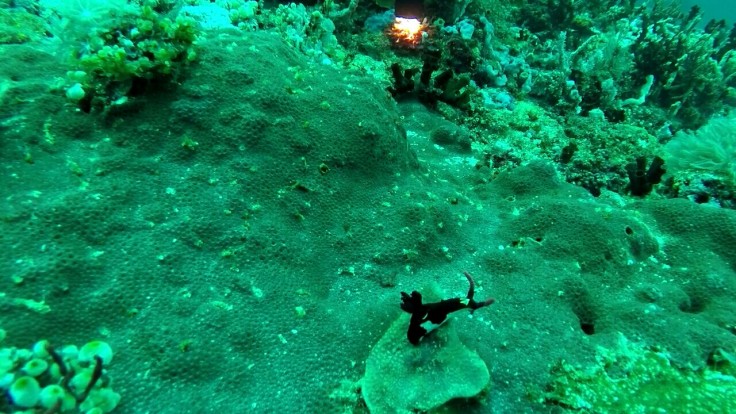 The second dive was at the Washing Machine, known for its strong currents which attract schools of pelagic fish like jacks and tuna. The currents were very mild today but that gave us a great opportunity to take our time along the reef. Anton spotted an adult boxfish for me which was beautiful.

The nudibranches here were magnificent. There were lots of them and great variety along with some of them being huge!!

I saw a giant cuttlefish swimming out into the blue, looking like an alien spacecraft.

Anton found a couple of well camouflaged stonefish. As we were heading up towards 5 metres we saw a banded sea snake and spent a few minutes with it while it hunted. Then it went up for air and it was just breathtaking watching this incredible animal weaving so effortlessly through the water. 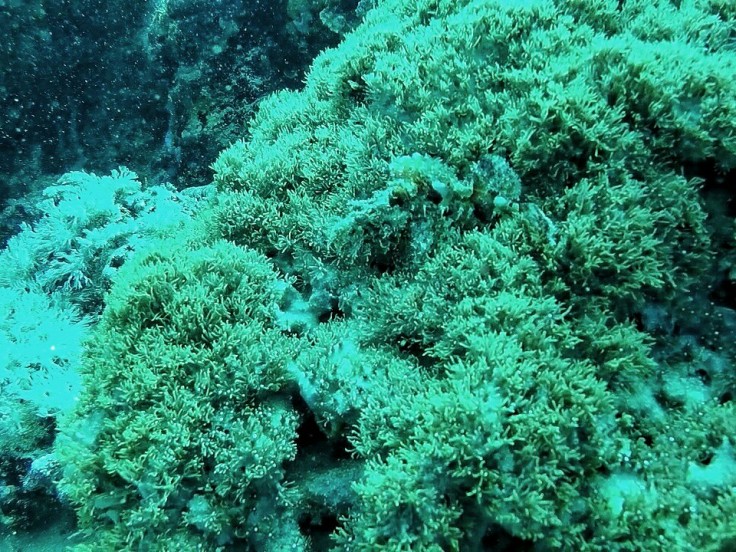 Our group for the dive today was fantastic. Hiro from Japan had been with us yesterday as well but we were also joined by a group of Filipinos from Manila. They were so friendly and massively into diving so I was getting tips for the rest of the month! 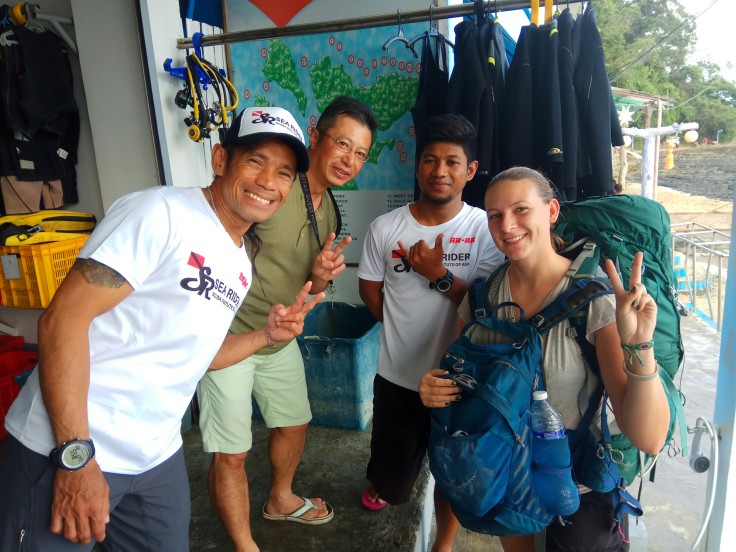 We met up in the evening at the dive shop for a rite of passage so we could officially join their dive group and go diving with them again next year if we like. They treated us to Balut. Which is a duckling cooked still in the egg. I have a very weak stomach so the thought of it made me feel quite ill but I eventually managed to eat it and, with a bit of salt, it was actually fine. Just a bit like chicken soup. It’s a delicacy in the Philippines and I think I’m glad I tried it with these guys. For the record, one costs about 18 Pesos and it’s pretty standard to eat three as a snack.

Anton and I went for some happy hour drinks at Montani Restaurant and then Ras joined us before dinner at Mangostin Restaurant along the beachfront. The food was really nice and not too expensive for the local dishes or pasta. I had Pancit Canton which is egg noodles with vegetables and pork, you can’t really go wrong for 195 Pesos (£2.90).

I packed before bed as I’m going to get up and leave tomorrow morning for my epic journey to Coron; the next island south. Sabang has been excellent all-round.

One thought on “Diving at Sabang/Puerto Galera”